The Gamecock has been a staple in the culture of the University of South Carolina.

The Gamecock was the official symbol since before it was officially The University of South Carolina.

Before UofSC, the college was called South Carolina College, which switched to UofSC in 1906.

The Gamecock was the university’s official symbol in 1902, with the transition from South Carolina College to The University of South Carolina happening in 1906.

However, it took 69 years for there to become an official mascot.

In the early years of the university, students themselves would create and don their own rooster styled costumes.

Nelson and his mother created the costume for ‘The Rooster’, made up of cardboard and fabric, ready for Nelson to audition to become the first mascot of the university.

According to an interview Nelson had with Kimberly Hunt of DatelineCarolina Nelson spoke on his first experience as the new “mascot”.

“Cocky had it big, born with lightning and smoke,” Nelson says. “I didn’t have the clout. I didn’t have a name. I was just there. I just walked into the Coliseum. It was so scary to walk in there.”

The Rooster lasted for another two years with the mascot finishing his career in 1973.

Big Spur, not to be confused with Sir Big Spur the live rooster, became the next South Carolina mascot

Big Spur greatly resembled the look of ‘The Rooster’ with an obvious improved look.

The cartoon-ish eyes and beak looked fairly good to debut in the late 70’s.

Students loved Big Spur, despite his presence at the university being short lived.

The University then introduced a mascot that has since stuck with Gamecocks.

Cocky was portrayed as Big Spur’s son, entering in 1980 with fan backlash.

Cocky was not well received as he did not resemble the same gnarly barn rooster of his predecessor’s.

After his debut, where he was booed off the field, the Athletic department decided to end the 1980 season for Cocky to take Big Spur’s spot the following year.

After a year or two, general acceptance of Cocky had begun to grow with students as he slowly took over for Big Spur.

In the mid 1980’s he was slightly redesigned after winning quite a few awards including a ‘National Champion Mascot’ award from ‘85-’87.

Cocky’s look has slightly evolved several times since his debut. 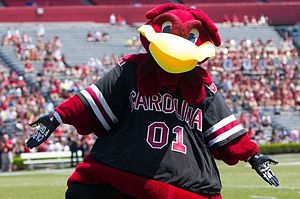